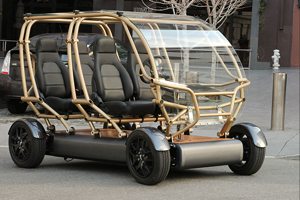 While most startups are focused on building software, Local Motion is doing something different by building an action electrical transportation vehicle with cool software to interact with the vehicle.

On both corporate and college campus it has become pretty popular to have ride sharing type of services, whether it’s bikes or actual shuttles. Well, not everyone can ride a bike and waiting for shuttles could be annoying, especially when you have to know its schedule and plan ahead.

That is where the cool Local Motion car comes in. Instead of riding a funny Google bike between office buildings, imagine if Google employees got to ride in this hip electric vehicle. The Local Motion car only costs 12c per mile, it’s green, and it’s software makes it easy for co-workers to collaborate on sharing rides and the fleet manager to keep track of where all the cars are.

Of course, this piece of fancy hardware will cost $12,000 per vehicle with a monthly fee for software support. The beauty of starting as a B2B business, however, is that your target market already spends lots of money on this type of stuff. During the Local Motion demo at the Launch Conference, Zappos founder Tony Hsieh, was definitely interested in talking to these guys about using Local Motion for the Zappos campus and maybe even downtown Las Vegas (which he’s re-building right now).

Since the vehicle is relatively expensive and is open (so it won’t work as well for corporations in states with winter), the team will need to do a lot of work to get Local Motion vehicles adopted nation-wide. That is why they’re currently raising millions as part of their Series A round.

Would you drive the Local Motion car?!